Two Strikes, You're Out

August 25, 2015
More accurately: I Need to Start Using a Mash Tun.
Warning: The following contains more beer brewing jargon than the average person will care to learn. That said, you can replace most terms with "beer-thingy" in your head, and be just fine.

I became passionate about home brewing after receiving a 1-gallon starter kit from Brooklyn Brew Shop as a birthday present, a few years ago. This year, I finally made the jump to brewing 5-gallon batches.
Every home brewer has a different history and approach. My kit being for all-grain brewing, it wasn't until this year that I even saw what an extract looked like. Eventually, I would use both dry and liquid extracts to make a Rye Saison, and a clone of President Obama's White House Honey Porter, but it turns out, most home brewers enter the hobby exclusively using these extracts. Many never make all-grain batches, even after years of consistent brewing.

Arguably, one method is no better than the other. Both can deliver the intended product: a delicious beer. Point being, there are countless paths from ingredients to a drinkable beer, and while I have luckily avoided ever making a "bad batch", I recently became accutely aware that I have never used a real mash tun. I'll come back to what that is in a moment, or you can watch these fine people make one:

When making 1-gallon batches, it was easy to complete my mash using normal kitchen pots, and lauter (strain) following the directions that came with my beer kits. Scaling up to 5-gallon batches, I learned about needing a "false bottom" and a mash tun, but I opted for the alternative method of using the "brew-in-a-bag" method, which you can see in the above photo.

After many successful brews, it happened: my trusty bag came in contact with the bottom of my brew pot while I was raising the temperature of my mash. Burning into the bottom, it tore a hole as I raised the bag of "spent" grain out, dumping some grain back into my wort (sugary grain juice). Without noticing until much later, I ended up completing the batch that way. Although the end result was still tasty, the clarity was awful, clean up time long and arduous, and I had to buy a new bag. 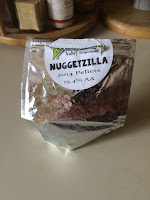 Fast forward to this Sunday. I made the ambitious decision to utilize my old 1-gallon kit, and brew a 1-gallon and 5-gallon batch of beer simultaneously. For the 1-gallon, I used my standard Black IPA recipe, "Black Stormy", a modified version of the Bitter and Esters "Midnight Blues", but for the hops this time, I opted for a double-dose of an enticingly-titled "Experimental Nuggetzilla" hop to pair with the Chinook hop base. This brew went smoothly, and all indications seem to point toward an amazing, albeit tiny, batch of unique, black India Pale Ale.

Unfortunately, turmoil struck when it came time to lauter the 5-gallon batch, an all-grain, all-Galaxy hops mod of another Bitter and Esters recipe that originally called for all Citra hops. First, I turned my back to wash a pot while mashing out (getting the wort temp up before lautering), and I smelled something burning... 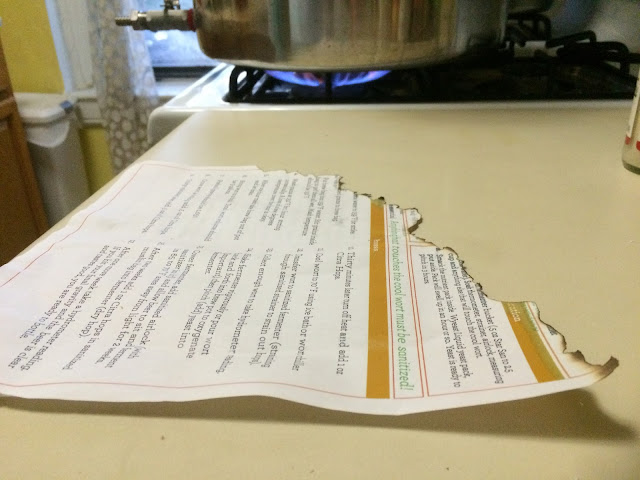 After laying in the same spot on the counter by the stove for over an hour, something caused my brewing instruction to catch fire! Luckily, my momentary panic, losing the part which listed the targeted OG and SG (original and specific gravity), and needing to clean up some ash, were the only consequences.

Next, in a twist of true comedic tragedy, my second, almost unused, brew bag suffered the same fate as its predecessor. Compared to the preceding, accidental fire, I handled this with considerably more grace. Setting up my fermenting pail to serve as an intermediary strainer, I strained the rouge grain while lautering, cleaned out my brew pot, and sparged the wort back from whence it came.

The rest of the process went mercifully smooth. I even popped open a bottle of Spanish beer my friend brought back for me from his Eurotrip.  Now that both beers are quietly bubbling away (while they ferment), I need to look into finally joining the ranks of most all-grain brewers, and finally buy - or make (see above YouTube video), a legit mash tun.


Thanks for reading! Fellow home brewers: Your comments are especially welcome, and for the unindoctrinated, feel free to pepper me with questions. I will hopefully know enough to answer. Otherwise, I will research it for you, and we will both learn something!