Welcome back to Shizuoka, Japan's peninsula of Izu! As some kind locals pointed out, these are only a fraction of fun things to do, based on the sights I was able to squeeze into my last trip to Japan, and it still required a second part! So strap in, because our next stop is Shuzenji!
Like Mishima, Shuzenji is one of those seemingly tranquil towns, hiding massive quantities of history, sights, and culture! Straight away you will notice the rural feel, beautiful Katsura River, and the romantic, red bridges and hand rails running along it. 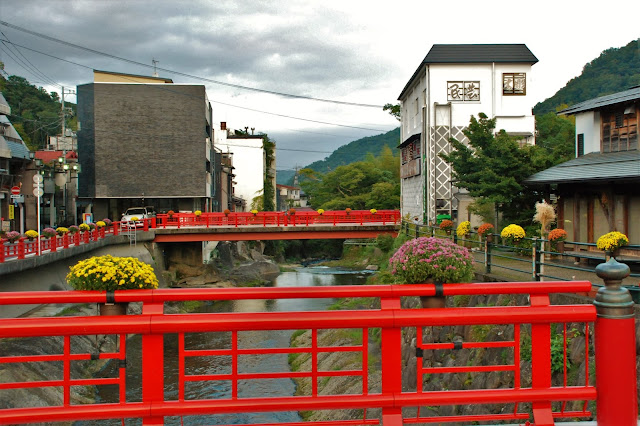 Shuzenji is said to be founded by Kobodaishi, the prominent Buddhist monk of Japanese folklore. This semi-historical figure, like America's Johnny Appleseed, had a mysterious knack for locating onsen, natural hot springs, up and down Japan. The name of the foot onsen below, "Tokko", means iron club, because Kobodaishi struck the earth with such a club, and the hot water sprang forth. 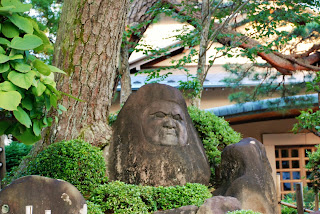 As a monk, Kobodaishi was also known for spreading his Buddhist teachings, and the man himself is oft likened to a daruma (from the word "Dharma"). Daruma are the red figurines you may have seen, outlining a meditative figure. On this trip, the city provided a volunteer tour guide who took us to Shuzenji, the temple Kobodaishi founded, and for which the city is named for. Our guide explained (in English!) that the daruma is a symbol of persistence, because it is hard to knock over, and easily rights itself. He also mentioned that most temples do not allow pets, but because Kobodaishi loved animals, this temple makes a rare exception. Sure enough, while we were there, several people came with their dogs, most likely to pray for their pets' good health, as well as their own. 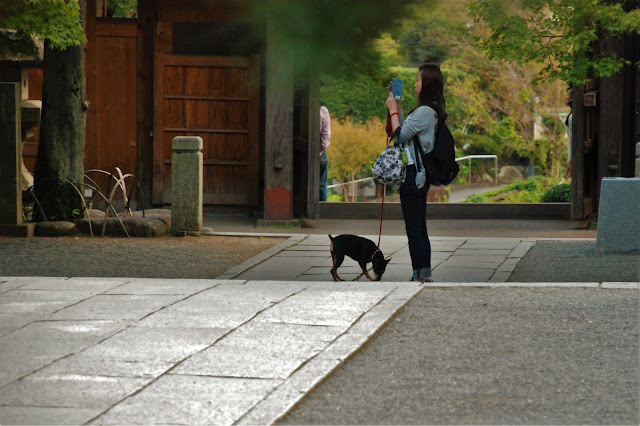 From there, we walked through the small city center to Shigetsuden, the oldest wooden structure on the entire peninsula of Izu, and home to a collection of Buddhist sutras, statues, and the final resting place of Minamoto Yori'ie. The second shogun of the Kamakura Era. Along the way we passed many cute shops selling traditional Japanese knick-knacks, and friendly locals (of the human and feline varieties). 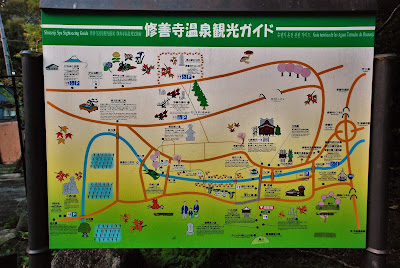 At Shigetsuden, I noticed most of the sight seeing spots had these handy maps displayed:
The maps are most convenient, because Shuzenji contains many ancient, historic, and cultural sights, all within walking distance. For this reason, Shuzenji has earned the nickname "Little Kyoto". If you have traveled Kyoto before, you will appreciate the close proximity of everything here. Combining that with its off-the-beaten-path feel, Shuzenji possesses an intimate quality, unique and of its own.

When I do go to Kyoto, I always make sure to visit one of my favorite spots: the bamboo forest at Arashiyama. Living up to the "Little Kyoto" name, Shuzenji has the charming "Chikurin no Komichi". Literally meaning "Bamboo Forest Lane", the path snakes along Katsura River, and at its heart has a large, cute, circular sitting-area (if there's a word for that, someone please tell me), that you can sit down and lie back on, staring up at the sky through the bamboo and Japanese maple leaves. 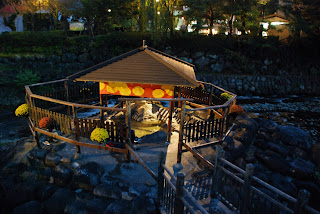 All of these sites at night are equally, if not more appealing. The small town feel does come at the cost of lacking a lively bar scene. That said, there are izakaya (tapas-style a.k.a. sake-house) Japanese restaurants open late, and the traditional ryokan hotel I stayed at, served drinks including local craft beer from the world-renowned Baird Brewery, which calls Shuzenji its home. It also had wonderful indoor and outdoor common areas to enjoy drinks. The public and private hotel onsen baths were open until midnight or later, and open early in the morning, if you need to relax or recharge before the next day's adventures.
Speaking of my hotel, I have only wonderful things to say about where I stayed: Arai Ryokan. The average cost for a room is $200 per night. They also offered optional kaiseki tasting menus for dinners held in private, beautiful, traditional, Japanese dining rooms. My actual hotel room could have comfortably accommodated 4 people, and walking through the lavish halls decorated by carefully maintained Japanese gardens and running water felt like this was part of the sightseeing!

A final word on Shuzenji: There was so much I did not have time to see, such as a tour of Baird Brewery, a visit to the Niji no Sato (Rainbow Village) Outdoor Recreational Park, the Cycle Sports Center with every kind of wacky bicycle imaginable, golf ranges, or hiking Mt. Daruma. If you are nuts for craft beer, or love the outdoors, these are more excellent reasons to explore the area.

More info on tourism in Shuzenji can be found here.


You have two options when you decide to leave Izu, from Shuzenji: You can retrace your steps, going back to Tokyo, or onward to Fuji; or if you don't plan to hike Mt. Fuji and want to continue journeying westward, away from Tokyo, consider taking a ferry across Suruga Bay. It will cut your travel time from one side to the other almost in half.  Also, weather permitting, you can see dolphins in the ocean and Mt. Fuji on the horizon, while traveling one of the only water routes recognized by the government as an official "highway"! The highway number, 223, is a classic Japanese play on words, since 2 can be pronounced, "Fu" or "Ji", and 3, "San". Put them together, and they spell "Fuji-san", the proper name for Mt. Fuji.

The day I went was expressly to see Fuji-san, but because it was raining, my tour guide apologetically invited me to the relax in the upper-level luxury floor of the ferry, and even took me to meet the captain and see the bridge! They both proudly pointed out, in addition to the latest in maritime safety technology, they also had a miniature Shinto Shrine on the bridge with offerings to the kami (gods), covering all the bases! 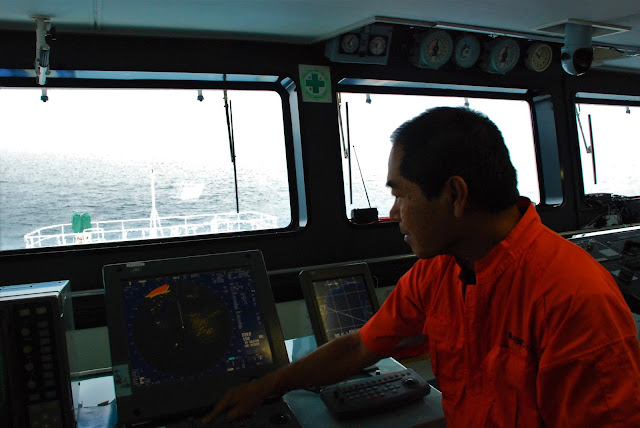 Thanks for reading/sharing/using this to plan a proposal to your significant other! *wink!*
I have much more to say about Central Japan, but next up will be a few posts about my home brewing and 33rd birthday trip back to NYC! Stay tuned.