Showing posts from December, 2018
Show all

The Secrets of Sake: Part 3, SHUBO 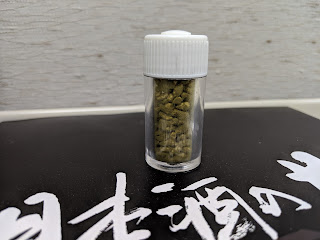 Part 3 SHUBO (Part 1 is   HERE ) An alien race had descended upon the sleepy land of Tanbo. Abducting every last villager, uprooting their verdant homeland in the process and tearing it to shreds. The people, known as Sakamai, were subjected to all manner of torture by their insouciant captors. Starved in the cold, and then worked over mercilessly. In a sudden 180, they were reunited with their brethren and plumped up, only to be separated once more. Finally, they found themselves subjected to some bizarre biological experimentation at the enormous hands of the towering aliens. Latched onto by hundreds and hundreds of previously harmless house pests they recognized from Tanbo, slowly the Sakamai began to link telepathically with these simple creatures, who they came to learn had their own thoughts, and a name: "We are Koji. Soon we will become one..." True to their word, the Koji were not shy as they latched directly onto each and every Sakamai, adhering like le
Post a Comment
Read more

The Secrets of Sake: Part 2, KOJI

December 03, 2018
Part 2 KOJI-KAKE (Part 1 is HERE ) The once robust and happy Sakamai, villagers of Tanbo, were already quite unrecognizable. Stripped not only of their brown clothing but their very layers of body fat and protein, only to then be engorged with steamy hot water. They looked like a new race; fluffy, round, and starchy white like snow. The mysterious alien beings who forced such change upon them without mercy or explanation were not finished with the Sakamai's transformations - not by a long shot. For all the brutality and advanced technology they utilized up until this point, things were about to get incredibly, deeply weirder. Resting in their latest prison, the Sakamai were trapped but momentarily reunited, warm, and fed. Despite the terror they had endured, the villagers were grateful, some even overcome with joy for the respite. It seemed as though throughout the chaos and torturous conditions, everyone had somehow survived, undergoing the same process. Just as reli
Post a Comment
Read more
More posts