Showing posts from 2017
Show all

June 29, 2017
Welcome back, class. If you're just joining me, this is part 4 of " Why Did No One Tell Me?!? " or, " What High School Should Have Taught Me. " ( Part 1 is here. ) To be honest, I wasn't sure if there would be a part 4, because gauging and organizing what I know and think you should have learned already can be tricky! That gets to the heart of why I write these at all, though: None of these lessons are new. Many people never learn them, but those that do think it is all just "wisdom" that comes with age, and often don't realize how much transferable knowledge they are keeping to themselves, when it could benefit you to learn too! Anyway: Today's lesson is: Don't Pay for That! Got a parking ticket. Fought it. Won. Got a $360 demand for car re-registration from the DMV. Made a phone call, went in, filled out a form, and waited an hour to be seen, but saved more than $120 by getting the "delinquent" fees waived.
Post a Comment
Read more

When am I not  brewing beer or cider, right? The last two months, though, I focused on brewing, and in particular, brewing other  things, with plenty of new "firsts", I am excited to share with you, here: Kombucha: IT'S ALIVE! If you have never heard of kombucha, taking a trip to Whole Foods might only confuse you. There are so many radical, juice-spiked concoctions, carrying the trendy probiotic drink's name; some of which taste downright terrible. Traditional kombucha is a lightly fermented black tea, so I focused on making that, without the extra flavors. The off-white pads you see floating in these jars are called "SCOBY", an abbreviation for "symbiotic colony of bacteria and yeast". I think that alone would gross out a majority of people from trying it, but obviously not this guy! For my first go, I ended up using some cheap, bottled, unsweetened black tea and adding the recommended amount of sugar to feed the scoby, but long-term, t
Post a Comment
Read more 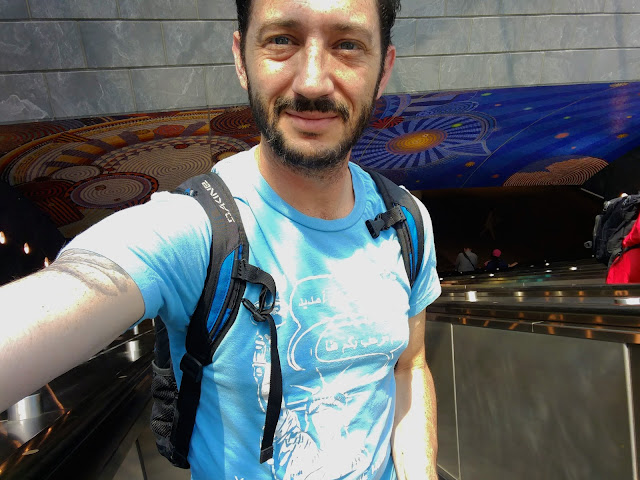 Oh, hai. Exiting the new Hudson Yards 7 Train stop at 11th Ave and 34th Street   Last month I made it around the sun for the 33rd time! To celebrate, I went back to NYC, the city that never stops telling you how great it is. With no plans apart from "see as many old friends as possible"; it did not disappoint! At the best of times, I am a "plan as I go" person, which can be paralyzing for some travelers, but having an open schedule led to discovering some great opportunities, reunions, and fun, such as a Rick & Morty pop-up shop, a Will Eisner exhibition, and Storm King!  Rather than taking you through my trip chronologically, let me break it up by subject. Obviously there will be some overlap, but hopefully you will enjoy the ride... Accommodation:  First, ALL praise goes to The Piper family for putting me up in Astoria. Zach and Nano were very patient with me coming and going at all hours of the morning and night. Nano was not pleased, but at
Post a Comment
Read more
More posts