Showing posts from September, 2015
Show all

Hoodies, light sweaters, and leather jackets dot the shoulders of New Yorkers.  Flu shots, occasional chilly nights, and, allergies will leave some afflicted. For the rest of the northern Hemisphere this means autumn arriving, but for New Yorkers and international media, it means an annual two-week period of Midtown East madness known as the United Nations General Assembly.  Leaders of of the world converge on the Big Apple, giving speeches that television media will play and replay, dissect and analyze. But the speeches themselves, while sometimes surprising, and even entertaining, do the least in the matter of reconciling state agendas with regional and global contenders. The true cause of the traffic nightmare, and the real foreign policy chess moves, occur over a rapid succession of serious, closed-door, bilateral or trilateral meetings between states, in sections of the United Nations, and its neighboring hotels, where the press are forbidden to follow.  The public faces of
Post a Comment
Read more 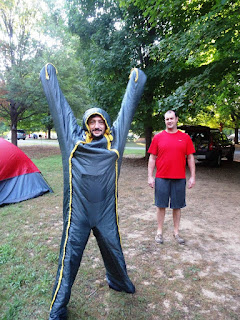 By the way: I have a sweet sleeping bag. I spent every day the last week working at a new job, at  En Japanese Brasserie . Today marks both my seventh, straight day working, as well as the first official day, having finishing job training! While the job is just part time, to allow me more time to focus on writing, the timing perfectly caps off my August of unemployment, which ended stylishly, culminating in an epic farewell to lazy days. I had the great fortune, this Labor Day weekend, to camp with my fellow JET Programme Alumni and other friends. This was the first time in five years that I camped. By "camping" I mean, pitching tents and sleeping in bags. I am not counting staying in cabins, because although I still prefer the privacy and comfort of a cabin, there is a greater appreciation of comfort that comes from the end of an actual camping trip. Despite what I just said about roughing it, we ate like kings! My alumni group excels at planning and teamwork, and t
Post a Comment
Read more

Do This. Do It. Have You Done It Yet? Hurry Up.

TL;DR - Even if you've never heard of  Pendleton Ward's " Adventure Time" , you should watch BRAVEST WARRIORS, on YouTube. (Links below). I don't think this is the original artist, but this is a great picture! You may not know me. Perhaps you found this by chance. Who am I? One small voice in an online ocean, directing you here or there. Like the rhetorical structure "There are X types of people in this world", you can slice my personality into many shapes: journalist, beer maker, Japanophile, silly weirdo. My eclectic interest in all subjects allows me to converse and make friends easily with almost anyone. But, there are two places where this gets me in trouble: I come off as an insufferable know-it-all, sometimes. I constantly quote things from outside the area of interest of the people around me. I sincerely hope everyone understands both are unintentional. I do not feel smarter or better than anyone. I know what I have picked up from
Post a Comment
Read more
More posts