September 21, 2015
Hoodies, light sweaters, and leather jackets dot the shoulders of New Yorkers.
Flu shots, occasional chilly nights, and, allergies will leave some afflicted.
For the rest of the northern Hemisphere this means autumn arriving, but for New Yorkers and international media, it means an annual two-week period of Midtown East madness known as the United Nations General Assembly.

Leaders of of the world converge on the Big Apple, giving speeches that television media will play and replay, dissect and analyze. But the speeches themselves, while sometimes surprising, and even entertaining, do the least in the matter of reconciling state agendas with regional and global contenders. The true cause of the traffic nightmare, and the real foreign policy chess moves, occur over a rapid succession of serious, closed-door, bilateral or trilateral meetings between states, in sections of the United Nations, and its neighboring hotels, where the press are forbidden to follow.

The public faces of heads of states and foreign ministers are veneers, oscillating between plastic smiles and appropriately serious grimaces. Their rhetoric, lined so thickly with concern for displaced refugees or human rights violations, you might think each ambassador was competing for a Nobel Peace Prize.
While actual work done toward solving these important matters probably ranks much lower than they'd have us believe, the General Assembly does provide the forum, and for better or for worse, some things do get agreed up, so to that end, we can call it effective and worthwhile. For his part, Secretary Ban Ki Moon has tried to utilize this in recent years by squeezing in additional, themed summits, preceding the procession of world leaders to the G.A.'s iconic podium.

Last year's was on climate change. It can be argued this paved the way to China's commitment to make modest cuts in fossil-fuel emissions over the coming decade. Unsurprisingly, issues such as nuclear power safety and solution-based road maps toward increasing renewable energy use - the kind of discussions that might inspire faith that concrete action toward a solution were taking place - were noticeably absent.

This year, the focus will be on "Sustainable Development Goals", a combination of ending global warming, poverty, and hunger. If this sounds like too much to effectively tackle at once, or too broad in scope to make any meaningful progress, you may be overly cynical, absolutely right, or both.
Adding to the prestige and nightmare traffic is Pope Francis' first visit to the U.S., arriving in D.C. tomorrow before coming here. As with every year's U.N.G.A. (pronounced "unga", like Captain Caveman, by insiders), the issues for discussion, agreed upon by those state ambassadors and their supporting staffs who work at the U.N. year-round, called "Missions", will quickly bow to the agendas and political crises of the moment when their superiors swoop in on private jets, from their home countries with their own entourages of security and assistants.

Similarly, the journalists who spend all year covering the U.N. beat -- learning an impossible number of four-digit Security Council resolutions and what decisions they refer to, as well as the unnatural verbalization of impractical abbreviations for U.N. bodies, such as UNMISS, the United Nations Mission in South Sudan, not to be confused with UNSMIS, the United Nations Supervisory Mission in Syria, or UNMAS, the UN Mine Action Service -- complain loudly an often, but mostly to one another, as they too bow to the premium access granted by the United Nations to state-run media and celebrity news anchors. Truth in journalism, like so many other things, is more about who you know, it would seem.

The biggest change for me, this UNGA, is that I will not be there.
Now that I am no longer working for Japanese media, I can be like the rest of my fellow New Yorkers avoiding that part of town, and my fellow Americans ignoring what happens at the United Nations. 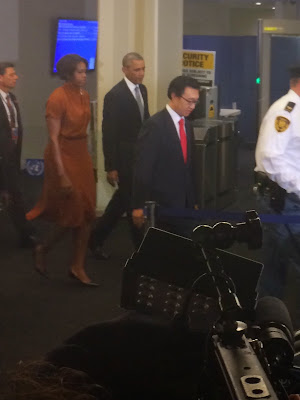 I will not miss covering the overly choreographed dance of politicians, well-intentioned U.N. staff, and journalists, doing their best with "the way things are".
In fact, I am going one step further, getting on a plane, and flying to Hawaii.

It is not that I don't care about ISIS, the crisis in Europe from refugees fleeing violence in their home countries only to be treated like stray, unwanted animals, Russian support of the Assad Regime and their continuing aggression in the Ukraine, or Japan restarting their nuclear reactors.
I simply realized that I can care while running through a labyrinth of arbitrary security check points to shout questions as President Obama walks by, ignoring me, or I can care while spending my life somewhere beautiful, with people I love, and my own impact on those issues will not change.