June 19, 2017
When am I not brewing beer or cider, right?
The last two months, though, I focused on brewing, and in particular, brewing other things, with plenty of new "firsts", I am excited to share with you, here:

Kombucha:
If you have never heard of kombucha, taking a trip to Whole Foods might only confuse you. There are so many radical, juice-spiked concoctions, carrying the trendy probiotic drink's name; some of which taste downright terrible. Traditional kombucha is a lightly fermented black tea, so I focused on making that, without the extra flavors. The off-white pads you see floating in these jars are called "SCOBY", an abbreviation for "symbiotic colony of bacteria and yeast". I think that alone would gross out a majority of people from trying it, but obviously not this guy! For my first go, I ended up using some cheap, bottled, unsweetened black tea and adding the recommended amount of sugar to feed the scoby, but long-term, tea bags and filtered water are more price-effective. Similar to beer, the kombucha ferments for about two weeks, before the optional, additional step of sealing the container for another week, to allow some natural carbonation to occur. Unlike beer and cider, after the initial sanitizing of the containers, no further steps are required to protect the brew, beyond some paper towel or cheesecloth on top to keep out dust! The scoby does the rest, and after three weeks, you remove the scoby, retaining some of the kombucha for it to live in.

My first attempt produced a refreshing and delicious, fizzy drink that I shared by bottling and capping it (advantage to being a home brewer!).

So how do you get scoby?
The beauty of making kombucha is the scoby themselves multiply and divide each time you make it. I got mine from a friend attending my housewarming party, shortly after drinking my first batch, I noticed mine had divided as well, so if this has inspired you to give making your own kombucha a try, holler at me, and I'll share my extra scoby with you!
Tangerine Cider:

In older posts, I have discussed the joys of brewing hard cider, especially how easy it is to do! Sanitize, apple juice, yeast, and ferment: so simple! I also mentioned making half-apple, half-pear juice hard cider. But a trip down the juice aisle at Costco got me thinking... what other juices might I use to make cider? I found some California tangerine juice (100% pure and not-from-concentrate) and bought a couple gallons (obviously, because hey, it's Costco). At the same time, I had decided in between batches of beer, I would make a 5-gallon batch of dry-hopped apple cider, using some excellent New Zealand hops I got through the American Homebrewers Association.

Swinging by my local homebrew shop for yeast, I discussed my plan with the owner, and he helped sway me away from trying a tangerine-only batch, for fear the juice would be too acidic for the yeast to thrive and ferment inside. Instead, I went with a half-apple, half-tangerine batch. Just to be safe, I added servomyces, a yeast nutrient, and opted for a "medium attenuating", English, ale yeast. What that means is, I used a yeast that leaves behind some of the sugar, rather than converting everything to alcohol. The remaining sweetness was just enough to balance out the tangerine juice's tartness, and the pictures you see above and below, are from the second and third gallons I immediately brewed afterward, by popular demand! The alcohol content was 6.7%, too, so it doesn't take much to get you pleasantly tipsy. Here is everything I used, if you want to recreate it yourself:
UMESHU (Japanese "plum wine"):
Have you ever felt the "bolt from the blue" feeling that makes your head shoot off your pillow first thing in the morning? This happened to me in bed last month, as I remember a conversation from a Japanese New Year's party about making plum wine. It so happens, the season for Japanese plums starts in May, and driving to the Mitsuwa Japanese Market in Mar Vista, I was right on time to pick up supplies! 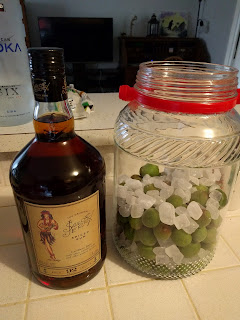 Umeshu, so called "plum wine", is actually a grain alcohol, combined with rock sugar, to slowly leach out the plum's essence. The result is usually stronger than real wine, but not as strong as the grain alcohol you start with. My original plan was to use Vodka, as most umeshu is made from this, or Shochu, another clear, distilled liquor from Japan, but remembering that New Year's party -- and possibly the best umeshu I've ever tasted -- the guy who made it confessed to using spiced rum instead, and so that is precisely what I did too! As you can see from the photos below, one handle (1.75 liters!) wasn't enough to complete the recipe, so I also mixed in my previous, remaining, dark rum, and leveled it off with vodka. Before I could do any of that, I had to prepare my plums! These are Japanese plums, not to be mistaken for another variety, and should be carefully cleaned, soaked in water for a couple hours to remove bitterness, and dried before being used. The following is a hilariously adorable and helpful explanation (from a YouTube channel un-ironically named "'Cooking with Dog") of that process for making both ume-syrup for cocktails, and umeshu:

If you don't feel like watching that, here is a photo of everything I used, and a few more of the process: 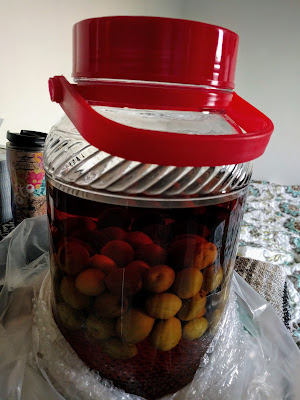 One month later, I checked in on my umeshu, and this is what it looks like. As the video mentions, you can start drinking it after a few months, but for the fullest flavor, you need to wait a year!
This will live in my closet for the rest of the year, and I plan on breaking some out at the next New Year's party, to share with the guy who inspired me!


Last but not least...
Kegging, the Final Frontier:
Long time readers (Hi, Mom!) will know, that I have taken my time learning the ins out outs of brewing craft beer. Starting with fun little one-gallon all-grain kits, and eventually making my own recipes, 5-gallons at a time, and messing with everything from dry-hopping, water conditioning, and immersion wort chillers. But I never kegged my own beer, until this month!

Just before I left for my birthday trip to New York, my brother and sister surprised me with everything I need to keg and drink my own beer, straight from the tap! Pictured below, is a five-gallon Cornelius keg, AKA a soda keg, or "Corny keg"... it has lots of names!
So just before I flew Back East, I invited some friends over and whipped up a batch of my Black Stormy Black IPA!
This day was another "first" for me, in that I got to use my newly-purchased, second-hand burner, and propane tank in my own backyard! 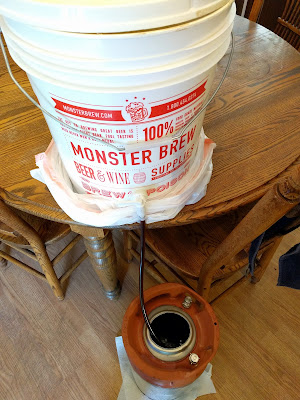 Fast forward to after my trip, my black IPA was ready to be kegged! After much scrubbing and sanitizing of the inside of the keg, I filled it, sealed it, and attached the CO2 tank using the regulator, and hoses pictured:


Thanks for reading! Tune in next time for more Hidden Japan, and I'm sure to write about my upcoming trip to Boulder, Colorado for my brother's 25th birthday! Bye for now, and as always, please comment, question, and share as you like!