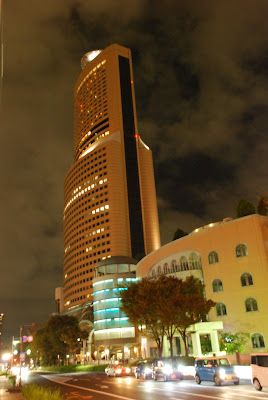 It's unusual for me to talk about a city and not go straight to talking about the food. I promise I will get to that. First, I want to talk about Hamamatsu, "The City of Music". Having taken my third trip there last year, I noticed more and more, the city has an authentic identity. Home to Yamaha, Roland, and Kawai, Hamamatsu has flourished thanks to these internationally recognized companies, and the city has shown their support in kind. I laughed out loud when someone pointed out that my hotel in the Act Tower, was very literally designed in the shape of a harmonica, down to the elevators lighting up the teeth as they ascend. That is so wonderfully Hamamatsu!

The manhole covers and other promotional materials, depict Hamamatsu's kawaii, mascot-version of Tokugawa Ieyasu (pronounced: E.A. Yeah, Sue), the powerful Daimyo who conquered and occupied Hamamatsu in the 1570s. His piano-key pants a nod to the legendary pianos and synth machines made here. The chonmage (top-knot) that would normally adorn his head has been replaced by a cute Unagi (freshwater eel). But I have one more thing to talk about before I get to food: The Hama and the Matsu that give the city its name. To do that, I'm going all the way back to my first visit, in April of 2008, before I even started a blog! 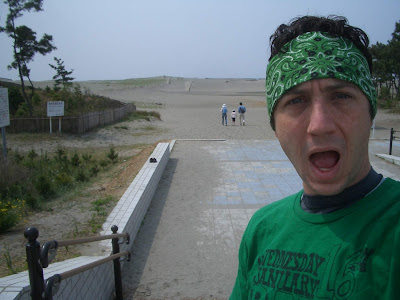 Wow! Yup, that's me 10 years ago. But 10-years-ago-me was more impressed by the Hama (beach), or more specifically the sand dunes. That's because apart from the ones in Tottori, on the Sea of Japan north of Okayama, these are the only other sand dunes in Japan and famous for where sea turtles lay their eggs - although really the babies who hatch and immediately must flee for water before birds eat them are what's famous. Ganbarre (fight on) baby turtles! You can also see the matsu (Japanese pine) that grow on the edge of the sand, and conveniently provide a natural buffer for the busy city from the coastal winds blowing sand everywhere. These same sand dunes are also the site of a crazy, massive, kite-battling festival in early Spring. Not far away, a museum dedicated to that festival allows visitors to enjoy the kites year-round. With hundreds of beautifully crafted kites, this museum deserves a visit, and you don't need to speak Japanese to enjoy the artistry. 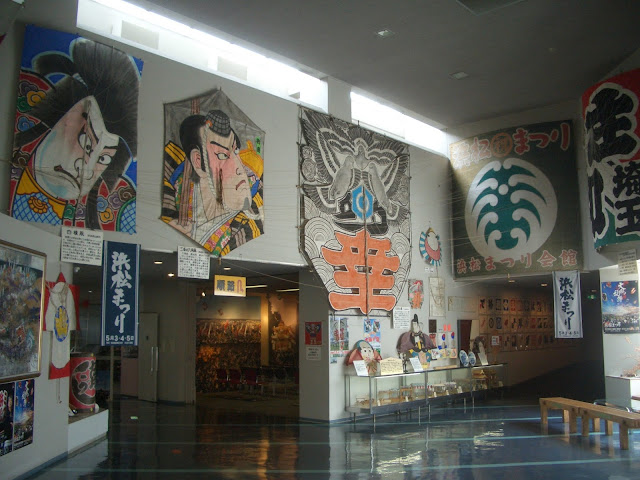 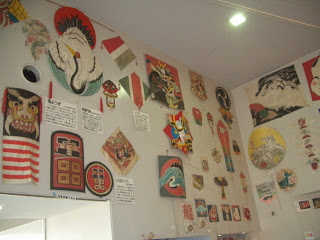 In addition to music, culture, and nature, Hamamatsu is a major manufacturing town.
So, let's talk freshwater eel or UNAGI! Most of you know unagi from sushi menus, but all across Japan, Hamamatsu is known for making "Unagi Pie", an elongated elephant's ear-style flakey pastry that uses a proprietary (read: secret) amount of unagi in every, delicious, individually wrapped "pie". Sorry vegetarians!
The photo below shows that 9 years later, I can grow a decent beard. But it also shows a few varieties of the pies about 12 times their actual size, which is around 6 inches. This was taken after a short tour of their factory, where you can peek into each step of production. Since their inception in 1961, Unagi Pie has been marketed under the dubious slogan "a snack for the night" - given eel's long history in Japan as an aphrodisiac. But the company officially denies any explicit connection. Wink wink. 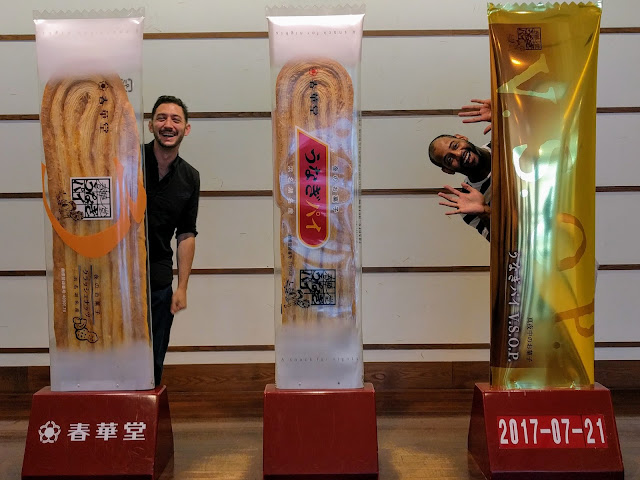 The next spot I want to introduce will require a Japanese speaker's help if you want to visit, but any extra effort will be well rewarded! Meijiya is a small, craft soy sauce factory. The family business, led by its 5th generation owner, operates out of their own home, where 3 generations (the 6th and 7th) all live together! Not only did I get a tour and education on how soy sauce is made, they even provide small bowls of moromi and mini-presses and filters, to bottle your own soy sauce! 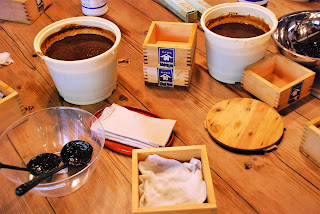 When we were finished making our own personal bottles of soy sauce, the family served us ice cream, tea and wagashi (traditional Japanese treats) while they made us cute, business card-sized certificates of completion. Y'know, in case you want to add "soy sauce maker" to your professional resume! Seriously though, the family had such a kind and warm home, it felt more like a homestay than a factory tour. I can't recommend enough paying Meijiya a visit, and yes: their soy sauce is next-level deliciousness! 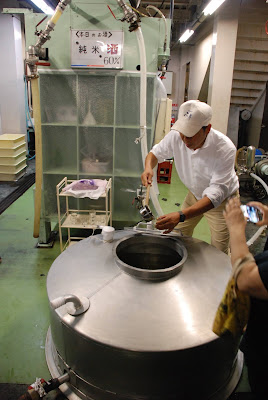 You may have heard of my next spot, Hana no Mai, because they produce great sake you can even buy here in America (The most common you can find is a dry sake, called "Katana"). If craft alcohol is your scene, I recommend emailing them and scheduling a free tour! It's definitely one of the larger craft sake breweries (Almost as large as Avery, in Colorado).

On my tour, the Toji (head brewer) himself, Tsuchida-san, started off by showing a very routine video describing how sake is made. With the basics out of the way, he gave a fascinating tour showing where each step of the complex brewing process takes place. The tour also included tasting arabashiri (unaged, undiluted sake) and ended at a beautiful gift shop with plenty of great sake to taste and purchase. 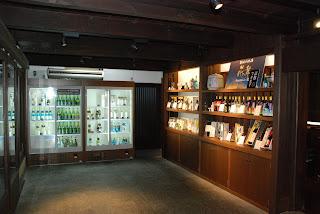 There are still more manufacturing-related sights on my own list to see next time, including Honda and Suzuki. If you're a fan of motorcycles, that alone should be reason enough for you to pay a visit.
Most of these factories require taking a train, bus, or both unless you want to pay up for a cab or guided tour - which are also options depending on your budget. One great thing about Hamamatsu, like most major Japanese cities, it has a vibrant, walkable downtown area, right near the train station. 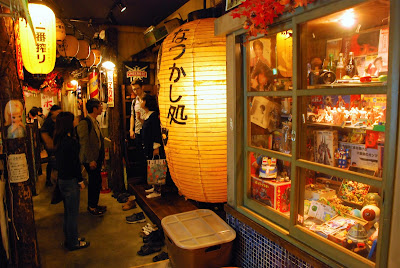 For my recommendation, check out Showa Shokudo. Showa is the post-war period that continued until the previous emperor passed away in the 80s, but commercially gets characterized by 50s and 60s nostalgia - think sepia and old school Godzilla movie posters. Shokudo means cafeteria, but Showa Shokudo is a fun and affordable Izakaya (Japanese Tapas bar). Unlike the many other chains you could choose from outside, the interior is decorated with all the Showa kitsch you may or may not recognize but will enjoy either way.


The menu had plenty of small, shareable, tasty dishes, and most importantly to this foodie, a prominent selection of local dishes, like Enshu-yaki (the local version of okonomiyaki), gyoza with bean sprouts, and other local specialties like eel and clams. Best of all, and a totally unexpected surprise: once a night, the entire staff bust out glowsticks, and pass out tambourines to celebrate any birthdays all at once with a song and dance. Customer participation is highly encouraged!
So that's "my take" on Hamamatsu! There are plenty of others out there, but I think this personal account includes a wider variety of attractions and a bit of the history and culture that I felt when I visited.

Keep in mind, Hamamatsu is also in Shizuoka Prefecture, directly southwest of Mt. Fuji, and east of the Izu Penninsula, a place I already wrote about in two parts. Even if you don't combine that with Tokyo where you will probably fly in and out of, you have a full, experience-based Japan trip, right there. But Stay tuned for one more Shizuoka city I can't wait to tell you about: a quirky, hidden gem called Gamagori!