October 15, 2018
Months ago, I noticed Adult Swim was holding their first-ever music festival. As a diehard Rick and Morty fan, I immediately knew I wanted to be there for the Day 3 lineup, with performances by Chaos Chaos, Run the Jewels, and something called a "Rick and Morty Musical Ricksperience", but with a one-day pass costing over $100 after fees, I resigned myself to sitting this event out, in the name of fiscal responsibility. Then something magic happened: a couple of days before the event, some magical algorithm on Instagram gifted me a discount code! My impulse-buy cost just under $74.
It was too late (and costly) to get someone to cover my lunch shift at work, which meant I wouldn't actually get to see Chaos Chaos perform, and not knowing anyone else, I hopped in a Lyft, worried I set myself up for a boring and expensive evening. Once again, fortune smiled upon me: 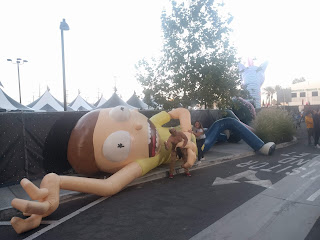 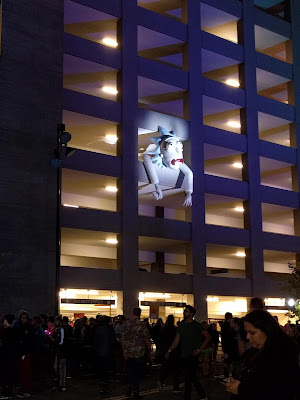 By the time I finished work and arrived at Row DTLA for the festival, it was 6pm and not a single friend responded that they were attending. Alone, I started wandering around to get the layout of the attractions. A large screen on the "Calico Stage" suddenly premiered the hilarious first episode of a new season of Harvey Birdman, Attorney at Law. I watched happily, especially pleased with Stephen Colbert's reprisal of his role as Phil Ken Sebben. 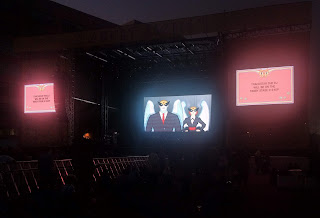 Next, I decided to play some games. One that looked especially fun and challenging, called "Smack Up My Uvula", continued the cat-theme to the festival. There was a 30-minute wait to try, but since everyone in line shared a love of Adult Swim shows, and other mutual nerd-interests, we all chatted the time away, until I looked up to see this happening:

That's the SpaceX Falcon9 rocket launch. It just happened at the perfect time, and position in the night's sky for me to take in the splendor in its entirety!
All of us waiting in line agreed that we live in a pretty marvelous age of technological achievement. As well as Elon Musk probably being an alien. 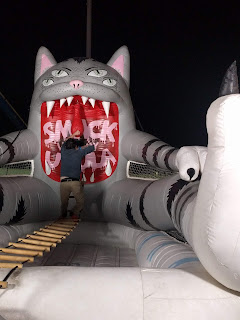 When my turn came, was I successful in smacking that 4-eyed cat-monster's uvula? You better believe it! I did not feel confident at all in the lead-up, because my only other similar experience was at a Renaissance Festival 20+ years ago, that went horribly and left me feeling embarrassed. Having redeemed me, receiving a collectible pin (in the shape of the festival's geometric cat logo) for my efforts, and getting to watch the SpaceX launch, all helped me feel pretty great about being there, even alone, and I went on to check out the rest of the venue. I listened to Trackstar the DJ perform on the "Tabby Stage" and played some more games, including a cheesy hole of mini-golf with a statue of Rick. The line moved a little quicker for that, and the same screen from earlier was now playing an episode of Rick and Morty. All of this added to my excitement for this "Musical Ricksperience". In looking for a good spot to watch, I also wound up making friends with some nice people who I hung out with for the rest of the night. 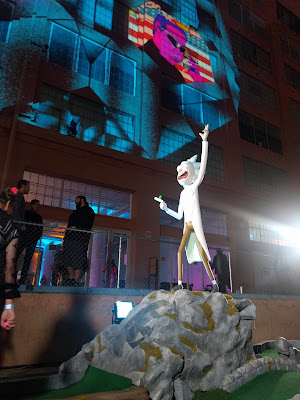 The first part of the Ricksperience was a full orchestra that performed the score by Ryan Elder, who was also on stage, for an entire episode of the show, start to finish. As much as I enjoyed it, what happened in the second half kind of melted my brain! One by one, other interesting people were introduced to the stage to perform covers of popular Rick and Morty songs, including Terryfold, sung by John Roberts, better known by me as the voice of Linda Belcher from Bob's Burgers. As good as both the covers and orchestra were, the finale was none other than Chaos Chaos, returning to perform for the second time that day - and my first time getting to see them live! Not only did they perform with the backing of the orchestra, but they also played my absolute favorite Chaos Chaos song - "Do You Feel It?" to an emotion-packed montage of Rick and Morty Scenes. It was so good, I even indulged in filming for a minute but click this link for a better idea of what I'm talking about. The finale had one more surprise, as they also premiered an animated version of Justin Roiland-as-Pickle Rick outtakes, which they shared online the next day.
After that I had about an hour to wander around before Run The Jewels performed, so I snapped some photos, bought some merch and a Korean BBQ rice bowl, and about half of Neko Case's set. I don't know what show features their music, but they were extremely talented! 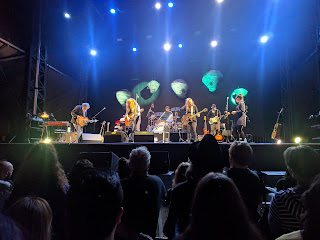 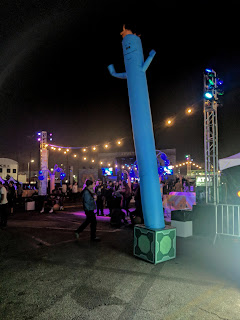 What happened next cannot be done proper justice by still photos and words.
Run The Jewels performance was full of emotion, energy, positivity, and stagemanship. Killer Mike, who also had one arm in a sling the entire time, impressed me especially with his ability to seamlessly navigate hyping the crowd, addressing issues like violence and mental health, speaking personally, and providing levity. 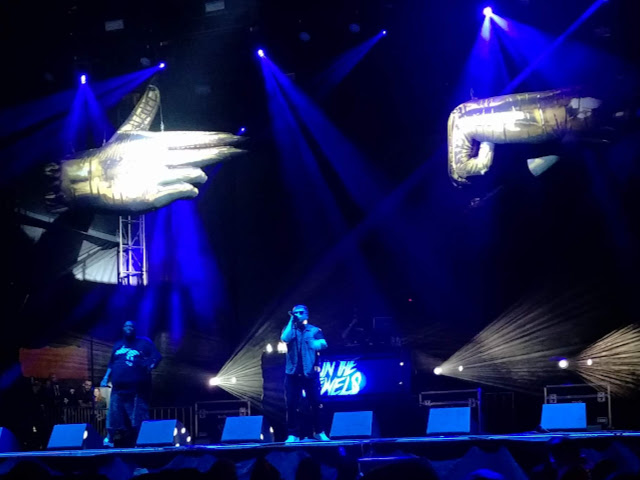 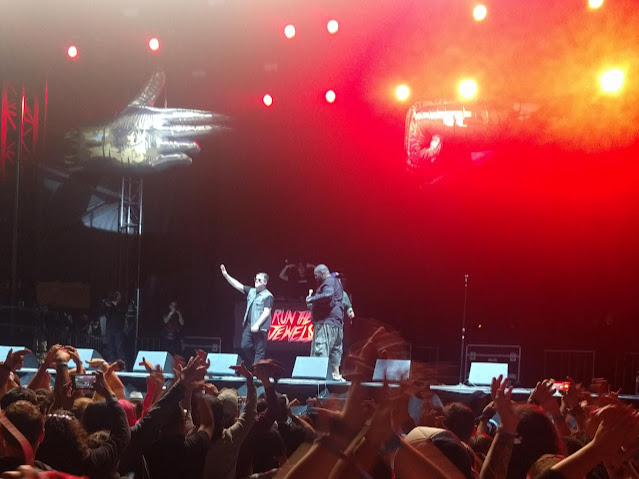 After saying goodnight, Run The Jewels returned for an encore, performing "Close Your Eyes" and surprising the crowd one last time, with Zack de la Rocha taking the stage mid-song to perform his part from the studio version!

I went home thoroughly satisfied with my choice to attend, and upon reflection, the full price of the one-day pass would have been worth it, too. If next year's Adult Swim Festival is held in Los Angeles again, I may even attend all three days...
Tune in next year for that!
Adult Swim Chaos Chaos Dan Harmon Falcon 9 Harvey Birdman Justin Roiland Launch Los Angeles music festival Phil Ken Sebben Pickle Rick premier Rick and Morty Run The Jewels SpaceX