Catch Me if You Can

October 19, 2016
As usual, I'm late. I just returned from Japan, but this is not about that. I wasn't able to visit Hiroshima, but in July, I took an all too brief trip back to New York, where this beautiful human being whom I first met in Hiroshima, Tim and partner Lia, gave me a their time, their ears, hearts, coach, and dog, for the duration of my time in Astoria. Sadly that fickle mistress, timing, did not permit me to attend the play Tim wrote and directed, but Tim did allow me to meet the cast and get a sneak peek at a rehearsal. While incomplete, I could clearly see his unique, collaborative spirit with which he directed, as well as the hard work and emotional energy he poured into this, his first of hopefully many plays he will put on! 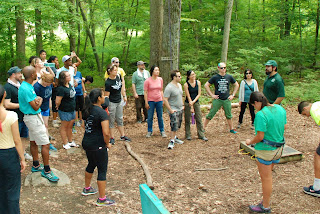 The centerpiece and original purpose for my trip however, was a JET alumni camping trip. The turnout was excellent! Although it had only been 6 months since moving to L.A., I was able to reunite with some friends I hadn't seen in years. I also met some of their families, significant others, and made new friends.
Arriving at the Taconic Outdoor Education Center, the lengthy self-introductions required for our massive group transitioned abruptly into strapping on safety harnesses to climb twenty-some feet in the air and traverse the trees on high wires! 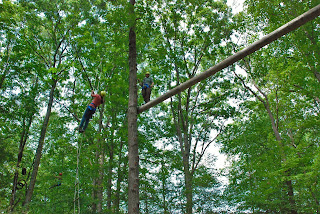 Did I say twenty-some feet? It may have been more! It certainly looked higher from below, and felt higher still frim above looking down! While some of our group may have struggled internally with the height, the biggest challenge I faced was pulling myself up a free-hanging rope ladder. I made it my first try luckily, because depending on how the struggle involved, I may not have had the strength for a second attempt. As we climbed, more friends from our loosely affiliated Dragon Boat team, Dragonflies, also arrived, further adding to our party (puns always intended). 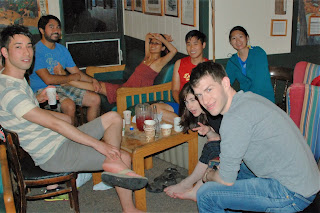 We finished up just in time for a bit of relaxation and a spot of lake boating, as a slight drizzle set in before dinner.  Regrouping in the main lodge and cafeteria, the drizzle turned absolutely torrential while we ate safely inside. Our plans for outdoor marshmallow toasting and S'mores seemed dashed, when from out of nowhere a few members produced a plethora of board games! I was ecstatic. Often, if I'm lucky, it takes weeks to coax a few friends into finding time to play just a game or two, especially with some of the more obscure and time consuming games, but on this night, everyone happily joined in for several hours. Eventually the staff (I assume, I was busy playing "Total Rickall", or Catan) lit the fireplace, and we had our S'mores after all! This also coincided with festive quantities of alcohol, so later in the night factions broke off, our party dwindling to only a handful, who remained deep in conversations, rich with silly banter, until energy and refills ran dry.

In the morning, the skies had cleared up enough for a slightly wet, but otherwise leisurely hike around the lake. Our final hours were spent back in the main cabin, or knocking around a volleyball, while others returned to the lake for rowing who hadn't. And just like that, we were saying good again. The cabins were not the best, but I would have gladly suffered another sleep on one to double our time together. 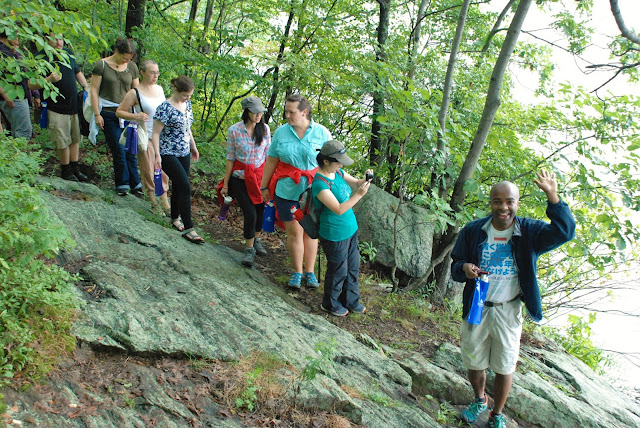 Still, many friends returned to the city by train with me, and I was able to see a few more friends that night too, eating and drinking at Barcade in Chelsea with Jon and Zach (yes, the Jon and Zach). Incidentally, this was literally around the block from where a pressure cooker bomb went off less than two months later. My friends were in Jersey at the time and so, mercifully, unharmed.

My last night in New York, the exhaustion of day drinking, spicy wing eating at Blackbirds, bussing, training, and walking all over to see as many friends as possible was starting to take its toll. Exhausted, I took a hour long break... also known as a train from Queens to Brooklyn, where my friends You Bred Raptors? performed pure musical genius for a paltry Tuesday night crowd in a far-flung venue. Honestly, as unfortunate that their effort fell on so few ears, I will absolutely brag about it when they are winning Grammys, Emmys, and Academy Awards. Hell, if they have a rock opera musical in them, I wouldn't be the least surprised if they achieve the elusive EGOT!
If it sounds like I miss Astoria, and my dear friends in New York: thank you for reading. I left a few things out, like (trying to) help paint Amber's new apartment and eat UWS Chinese noodles with Kate, Fatty's, Crescent & Vine, LIC Beer Project, Crescent & Vine, The Queens Kickshaw, and Crescent & Vine, but if you wanted be as exhausted as I was, you're better off just going and living it yourself.

I also took more photos on my smartphone, but I will spare you the slide show. These were taken on my Nikon DSLR.

Stay tuned!!
I have so much more planned. If you thought this trip sounded jam-packed, I just spent 10 days covering a couple months worth of tourism in Japan, which I will be writing about here, and in ChopsticksNY. I also have a new periodical planned, tentatively titled, "What High Schools Should Teach" alternatively, "A More Helpful Version of Seventeen Magazine". I think you get the picture. This will be an ongoing project with multiple posts. Chime in if you have a better name!