April 26, 2016
When we last left our hero, I was about to transfer my first batch of home-brew to a glass carboy for the first time! Did that go smoothly? Did tiny single-cell organisms perform the miracle of converting sugars into alcohol and carbonation? Does anyone get my PUN-ny blog titles?!? All that and more in this next installment of Long Time No Taco:

I have been very busy in the kitchen, and a lot has happened!
Transferring my peanut butter porter to the glass carboy for secondary fermentation went smoothly. I rarely get to use words like "smoothly" when describing home brewing; something unexpected always seems to crop up. such as 10 days later, when I went to bottle the beer, using my brand new bottle capper...

After transferring the beer back to the ale pail with some maple syrup to help bottle condition (the yeast eats this new sugar source to carbonate the beer in-bottle, but it doesn't significantly increase the ABV), it was time to rack (put the beer into bottles and cap them).

Racking the beer is typically the quickest process in brewing. The beer fills one bottle after the other, then pulling a bottle cap out of some sanitizer and sealing the beer in takes barely a few seconds each, ideally. This is also the last time beer is exposed to the open air before someone drinks it, so it is the final risk to the beer of getting infected by a wild yeast, fungi or bacteria, which could skunk it up, so keeping things sterile and moving quickly is of the utmost importance.

So big, shiny, and confidence-inspiring... or so I thought! Now this is not as mechanized as what you see Hank using in Breaking Bad, but the idea is still the same. You press down once, the crimping is sealed around the bottle, and you release and move to the next one. No big deal.

Instead, this capper gave me half-sealed bottle after less-than-half-sealed bottle. Shattering the first few I attempted to seal by squeezing more tightly, leaving me with a sink full of broken glass shards, and broken-bottles full of now-unusable beer. I racked my brain and analyzed the capper and the action of the handles, before finally coming to the conclusion, this capper is a piece of CRAP! I very carefully and painstakingly went over all the bottles again, sealing them one "corner" at a time by making multiple, partial presses to finally bottle the beer:
After that horrible experience, I went online to order one of my old cappers, and since I was on the website, I went ahead and ordered more supplies. Fast forward a week and a half, and a few bottles of that first beer are now chilling in the fridge to check on their carbonation (and taste!), and a second batch of home brew is bubbling away happily! 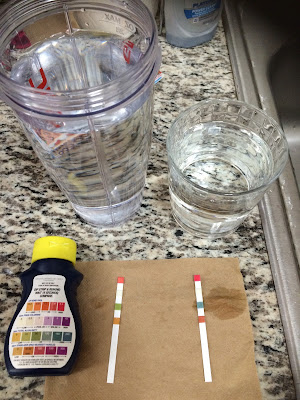 As I mentioned in my last post, I added a third tier to my sparging, so I could easily recirculate my wort. My brother mentioned not needing the strainer as long as the grain bed is intact, but I left it there as a way to see what was still getting through. Answer: not much! I also went an extra step in water treatment, re-filtering my already Brita-filtered water. You can see the difference in alkalinity between my hard-water tap (right strip) and twice filtered water, above (left strip). 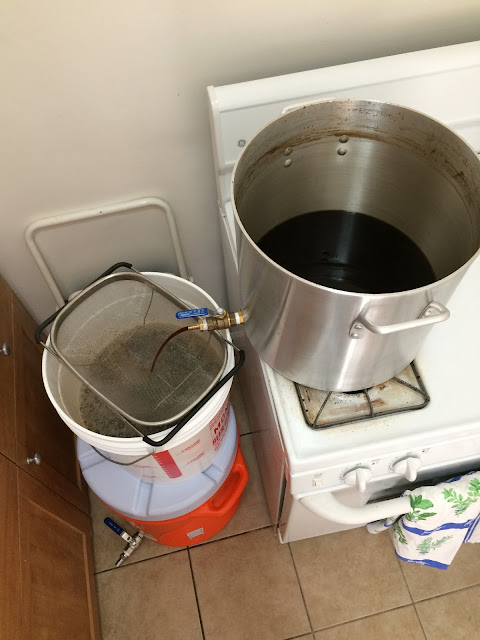 The boil went smoothly, and I opted to let it cool naturally in the ale pail for a day before pitching the yeast. This next beer is a black Belgian-style ale, in case you were wondering!
Tune in next week for more on this and the feline drama that rages in the background...